Well, the last few weeks has been fairly busy, but unfortunately, not all in a good way. Initially it was good, and the kids arrived at nearly the time they were due.

We'd decided that we'd take the kids out on the days that we had them, and the first visit was at the request of Hannah, to Drusillas Zoo Park in Sussex. Hannah had been there recently with one of m'Julie's friends and had enjoyed it so much she wanted to go back.

Surprisingly, although it’s not that far, it took us a while to get there, and we arrived just before lunch. then the was the second surprise, the cost of entry! So, with my wallet lighter to the tune of nearly £100 we made our way round.

Drusillas is a small zoo and isn't home to the 'bigger' animals, lions, tigers etc, but there is a variety of animals and I think that we all enjoyed our afternoon out. 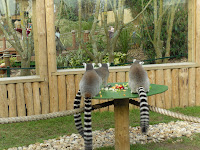 One thing that we did prove, if proof was needed, was that Drew is the loudest of the kids, as there is a part where you can compare your vocal talents to various animals.

The following day, we decided to kill two birds with one stone and headed to the Army Medical Services Museum near Aldershot. Fortunately this was free, and I had to sort some things out whilst I was there and left m'Julie and the kids to have a look round, catching up with them when I was done. However, I hadn't taken a camera, and due to m'Julie's dental background, most of the photos that we got were Royal Army Dental Corps in nature! 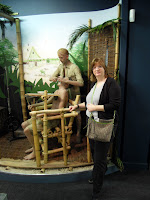 After this we grabbed some lunch and I got the opportunity to embarrass the kids. We'd gone to the Pizza Hut in Farnborough which, being a lunchtime, was quite busy. When it came to attracting the waiter/tresses attention so that we could order desert, we had no luck. The queue at the counter was also very long. And then I had a stroke of genius. From where we were sitting we could see the number for deliveries. I took out my mobile and I called it. At this point Maggie and Hannah tried to hide under the table and Drew went scarlet and decided that he needed to go to the loo.


It worked, though, so after that we went and visited Stan aka Porl aka Naive Zebra, and spent a very pleasant couple of hours with him and his brother. Stan also very kindly loaded the girls up with cuttings from his garden and the rest of us with various of his home-made sauces. 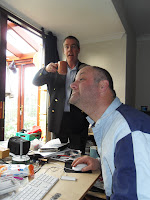 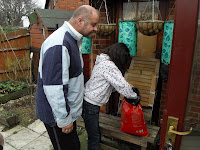 On the way back, we managed to avoid an accident when m'Julie spotted the 'Eat More Chips' lorry only because we were stuck in traffic on the M25, and m'Julie's high-decibel outburst had limited effect.


After the kids had gone home, there was then a routine fortnight of work etc. But all that changed last Friday. m'Julie and I were doing the month's shop and we were expecting the kids for the weekend. As we were paying, my phone rang. It was my eldest son, Alec, letting me know that he had just been assaulted, again, by his mother's boyfriend and was awaiting the arrival of the Police.


I say again, because this man (I use the term very loosely) Stephen George, has made a bit of a habit of doing this. The first incident was in September 2005, just after my ex-wife had introduced this creature to our children, having met him on one of those less scrupulous SOS (Sad Old Singles) internet dating sites. I was in Canada with the Army at the time, and apparently my son and his mother had an argument. George took it upon himself to settle the argument by pinning Alec to a bed and punching him.


Although the Police were called, my ex, her boyfriend and her mother concocted a story and he was let off, despite having previous convictions. The second occasion was when Alec was in Norway with his mother and her boyfriend, visiting his mother's cousin. Again he was assaulted, and again the Police were informed, but they lost interest when told that the offence had taken place outside the UK.


At least on this last occasion, George found himself in handcuffs and in the back of a Police van, although sadly the Police decided to release the cretin without charge later that evening. How this individual was ever allowed to stand for election as a Conservative candidate in the Trumpington Ward of Cambridge I will never understand.


As a result of this, his mother decided that she would, yet again, put herself ahead of her children. On the Saturday evening m'Julie received a text from my ex-wife informing her that someone needed to go to the back gate. The reason for this was that she had had one of her friends pile all of Alec's possessions into her car and this woman was unloading them outside the locked back gate.

So Alec is now living with us, his mother is continuing to be as awkward as ever and he is desparately trying to get sponsorship to do his gap year teaching in Guyana. All donations to.........
Posted by Rick at 17:19 No comments:
Newer Posts Older Posts Home
Subscribe to: Posts (Atom)