I'm going through a phase at the moment where my body clock seems to have reset itself, so I will go to sleep shattered and wake up 'hours' later. But when I look at the clock, I discover that I have been asleep for less than two hours. I then have the problem that I feel like I have slept for hours and can't get back to sleep again.

One of the advantages that I do have with my new iPod is that I can access YouTube wirelessly, which I did last night. Bizarrely, whilst surfing through the music on the site I saw a song that I hadn't heard for a long time. I clicked the song and as the first notes came through my earphones, the last twenty five years vanished. By the end of the song, I was once again 17 and (reasonably) problem and stress free.

There are many things that can elicit memories, smells and sounds particularly, and it fascinates me the way in which the brain processes these memories, giving a feeling of euphoria if it relates to a happy memory, and the sadness that you feel if it relates to a less happy memory. The song last night resulted in both responses, the euphoria because of what it related to and the sadness due to the outcome.

I've said before that there is very little that I would change if I could have my time over again, but it would be nice if we could occasionally go back and explain our actions and mistakes with the eloquence and maturity that we possess as the adults that we have become, rather than brashness and immaturity of the teenagers that we were. However, I suspect that some of my friends who have known me all of that time would argue that I have neither matured nor learnt eloquence in the last quarter century!

It is odd to look back and remember that when this piece of music was significant to me, I was younger than my eldest son is now.

Alec is now back in the UK, but is hoping to be flying out to either China or Senegal to complete his 'gap year'.

Unfortunately, his time back has not gone smoothly. Firstly, the people who were to collect him from the airport had a problem with their car, so, although he arrived back at 0700, he wasn't collected until 1900, by me.

Having collected him, I drove him to his mother's house. The following morning, there were numerous messages from his mother, and Alec, on my phone. The upshot was that she had thrown him out and he was staying with one of her friends.

Sadly, it will also be awkward for him to stay with me as we have rearranged the house since he left and he would no longer have a bedroom of his own, and it makes far more sense that he stay at his mother's, as that is where all of his belongings are. But she has put her carnal desires ahead of her son, again. She even gave Drew, Alec's brother, a hard time for allowing him into the house!

Hopefully, he will be able to meet up with the staff from Project Trust and head off to one of the other countries early in the New Year.

As I said before at the time that Alec was leaving Guyana, I was otherwise engaged.

The mess dinner went very well and I did fit into my mess kit (just!) It seems that I've put on most of my weight around my chin(s!)

The dinner was excellent, and the concern that there had been about the chef, this being the first function that he had cooked for since doing his chef's course, proved completely unfounded.

The menu was also very good, the starter being butternut squash soup. I'd never had this before and was surprised at how spicy it was. The main course was beef wellington, with sauté potatoes, green beans and carrots. The beef was also cooked to perfection, and I was actually unable to finish, although that was partly due to the concern that my mess kit was becoming tighter by the minute!

Desert was key lime pie on a ginger nut base, and then the usual coffee, mints and port for the toasts. All present seemed to enjoy themselves and were full of praise for the chef. The next dinner will have to be a guest night, or there's the risk that m'Julie will throttle me.

Oddly, I woke up on the Sunday with a bit of a hangover, but that had gone by the time I collected m'Julie a headed back to the Sqn. From there we headed into Maidstone and to coffee in the Mayor's parlour, prior to my separating from m'Julie and making my way, with the rest of the Mayor's party to the cenotaph in Maidstone and the Service of Remembrance.

Following this was the first visit this month to the church in Maidstone for the more formal service, before returning to the Sqn for a lunch.

The reason that this was the first visit this month was that I returned to that church last Wednesday for the funeral of the Warrant Officer who had died on 29th October.

The church was packed and there was a very large turn out from the Sqn. His son spoke, showing maturity far beyond his years, and many of the Sqn joined the family at the wake after the cremation.

So now it’s the build up to Christmas, which, unfortunately, has been building up on the TV for weeks with all the adverts. Hopefully, it will be good, particularly as all of the kids will be at ours. Now where's my Bah! Humbug hat?!?
Posted by Rick at 21:02 No comments:

With proud thanksgiving, a mother for her children,
England mourns for her dead across the sea.
Flesh of her flesh they were, spirit of her spirit,
Fallen in the cause of the free.

Solemn the drums thrill; Death august and royal
Sings sorrow up into immortal spheres,
There is music in the midst of desolation
And a glory that shines upon our tears.

They went with songs to the battle, they were young,
Straight of limb, true of eye, steady and aglow.
They were staunch to the end against odds uncounted;
They fell with their faces to the foe.

They shall grow not old, as we that are left grow old:
Age shall not weary them, nor the years condemn.
At the going down of the sun and in the morning
We will remember them.

They mingle not with their laughing comrades again;
They sit no more at familiar tables of home;
They have no lot in our labour of the day-time;
They sleep beyond England's foam.

But where our desires are and our hopes profound,
Felt as a well-spring that is hidden from sight,
To the innermost heart of their own land they are known
As the stars are known to the Night; 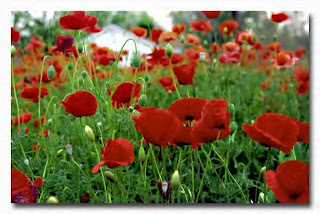 There have been several major changes since my last post, the first of these being that I am indeed a Major (can you see what I've done there?!) However, it was a bit of double-edged sword, as the day I was given my crowns was the same day that it looked as if the Squadron would be dormant for months.

There had been some talk for a while that the Government would need to save money, what with recession and their expenses claims, and one of the strategies that they had decided upon was to reduce training for the Territorial Army. I knew that some units were already doing unpaid training, but then the decision was made that all training would stop until April next year.

And where were we when we found out about this? On a weekend training exercise.

Initially, it had seemed that we would be unaffected, but then the axe fell on all TA Units, so I had to write to all members of the Squadron with the bad news.

It was not well received by the troops, but they understood the reasoning behind the decision, and many that were already booked onto courses said that they were willing to attend without pay.

It also meant that the Sergeant Major and I attended the launch of the Poppy Appeal without pay, although I don't think that either of us have ever claimed for the time for such an important event. The SSM was also being given one of the first poppies.

So, having written to everyone about the fact that there was no training, things changed rapidly within a week. First of all was the fact that the Government had relented a little, and decided for the sake of retention that one drill night would be paid.

I drafted another letter, but fortunately didn't send it, because within 24 hours, there had been a complete U-turn and all training was reinstated. Sadly, it was too late for some courses, but not for all.

Unfortunately, it wasn't all good news, as one of the Warrant Officers (the one with the simulated gunshot wound to the head in the last post) died suddenly last week. It is thought that he had a massive heart attack at home and as far as I was able to establish when myself and the SSM visited his widow the following day, he didn't even get as far as hospital. It came as a shock to most people as he was only 53. So my first order of business when the Squadron met again on Wednesday was ensuring that everyone knew, although we still hadn't heard anything at that point about funeral arrangements.

From a home point of view there has also been a major change, when my ex-wife telephoned me, the first time that she had actually spoken to me in about four years. But, like the harbinger of doom that she is, it wasn't good news.

It appears that Alec, my eldest, is not having as good a time as I thought in Guyana. In fact, he has been having a very miserable time and not getting on at all with the two people that he is living with in St Cuthbert's Mission. As a result of this, he has decided that he is returning home.

I telephoned him the day after the call from his mother and talked to him about the consequences of coming home after only nine weeks, but he was adamant, although he did talk about going to one of the other areas, either in Africa or Asia.

The fact that this was the first that I'd heard about all this, and the fact that it had apparently been going on for some time, far from impressed me. Particularly as I had made sure that the Desk Officer for Guyana at the charity had all my contact details.

When I spoke to him the following week, I was to discover why. He had been informed by my ex-wife that she would keep me informed about everything that was happening. I put him straight, and he's kept me informed since.

Alec leaves Guyana to fly back to the UK on Remembrance Sunday, arriving on the Monday, and then it’s a case of debriefing in Coll and hopefully, for him, flying out to the new location very soon after getting back to the UK.


At the same time that Alec is flying back, I will be in Maidstone taking part in the Remembrance Parade. But between now and then is my first mess dinner as OC. I wonder if I'll still fit in my mess kit...........
Posted by Rick at 20:18 No comments:
Newer Posts Older Posts Home
Subscribe to: Posts (Atom)