It’s been quite a while since I last updated this and the reasons for that will become clear fairly shortly. Also, because there has been quite a lot that has happened as well as the fact that I'm knackered, I'm going to do this in several parts.

So it all started almost a month ago on 14th September, a bright sunny, Sunday. So bright and sunny in fact that the decision was made that we would visit Scotney Castle. So we all piled into the car, picnic lunch packed and made the twenty minute drive to Scotney. Once we got there, we picked up the timed tickets for the house and then went to the picnic area for lunch. Unfortunately, this was where it all started to go wrong.

As we were eating, I developed a little chest pain. Unfortunately, I'd left my GTN spray at home, so I tried the old fall backs of adjusting position and having a little walk, and, surprise, surprise, neither of these worked. In fact, the pain increased and started to radiate down my right arm.

My next suggestion, with the benefit of hindsight, was not the greatest, however I made it anyway, and we all piled into the car to make the twenty minute drive home to get my spray, so that I could have it and then we could drive back and go round the house. And before anybody makes shouty comments, I realise that this is not the most sensible thing that I've ever done, but as I'm the only driver, it had to be done that way.

The drive back was 'interesting', as the pain was gradually increasing, both in my chest as well as my arm, but we got back safely, I found my spray and took it. Now GTN works within seconds, usually, but in this case, nothing. In fact the pain got worse, and I began to suspect that this was a little more than just angina. Another spray, nothing, so it was time to call an ambulance.

In Paddock Wood, we don't have an ambulance station, but we do have co-responders, so when we called an ambulance, the first on the scene were two of the local retained firefighters with oxygen (much needed and appreciated) and an automated defibrillator (bit premature).

The ambulance arrived about five minutes later, I was put in the back, given more GTN and taken to my local hospital. By the time we got there, this last load of GTN had worked and I felt fine, but I was still put in Resus with a fair few odd looks and comments (this being the hospital where I work), and subjected to all the usual 'tests'.

After a couple of hours, the decision was made and I was moved to the CCU (different room to last time, but still a private room). Fortunately, I had packed the portable DVD player and the Michael Palin DVDs before the ambulance arrived, so the boredom wasn't as great as it could have been.

When I saw the consultant the following morning, the blood tests were back and confirmed my suspicions that the pain that I'd had was more than just angina, and had been an MI, albeit a fairly minor one. I was also told that I would not be discharged, but was to be transferred to London and would have my surgery as an 'urgent' case once there was a bed available. I therefore had 24hrs of DVD watching and boredom before a bed became available and I was transferred.

Transfers are now performed by 'private ambulance services', which means that some of the employees are 'characters'. The two that transferred me were no exception. The driver was about six foot eight and looked like he'd once been employed as a wrestler. Then there was the attendant, the guy that I was subjected to during the trip to London as he was sat in the back with me.

During the trip to London, this man, who informed me that he was badly asthmatic and had once nearly died due to a gastrointestinal complaint, also informed me that he had been a Commander in the Royal Navy and spent most of his navy career working undercover in Northern Ireland and other trouble hot spots throughout the world and that after leaving the navy had trained as a paramedic, but following his near fatal gastro trouble he had decided to work purely as an Emergency Medical Technician as there was less stress. In the meantime, the longer that the journey continued, the more certain I was that we would never arrive at our destination as my will to live ebbed away faster and faster.

The whole episode was beautifully summed up by the driver when we did eventually arrive at the hospital and he offered me a towel as he was sure that my ears must be bleeding.

I then had the indignity of being placed in a wheelchair (the crew insisted that I had to be wheeled) and I was taken to the surgical ward, where I was eventually shown to my bed by a staff nurse with a more than passing resemblance to a Hobbit (I'm sure that there was hair poking out of the top of his shoes!) One snippet of information that he did give me was that I had been on the operating list for that day, but because I hadn't turned up the day before I'd been cancelled. When I explained that I had been in another hospital awaiting the call to say that there was a bed available, he informed me that 'Oh no, there weren't any beds yesterday'. I considered it pointless to question why he'd told me about being on the list.....

The ward staff were a completely diverse mix, as reflects the area in which the hospital is located, with the majority of them being African, West Indian or Asian, or more specifically Nigerian, Jamaican or Filipino. However, there was one member of staff who caused me some concern. This was the Senior Staff Nurse from Portugal. Don't get me wrong, I have nothing against the Portuguese, but I was concerned that this chap, nice though he was, was in a position of some responsibility, and through attempting to talk to him, it appeared that his command of English was just marginally better than my (non-existent) command of Portuguese.

It didn't really come as any surprise, but unlike the CCU, once on the cardiothoracic ward I was no longer in my own room, but in a four-bedded bay. At the time that I arrived, this did not seem to be a problem. However, that night, the reality hit home. In the bed to my left sat a man who had had his surgery, Koran in hand and chanting the same thing over and over, until the early hours. There was also a distinct smell that suggested he may have been unsuccessful in his bid to secure the use of a commode.

Diagonally opposite from me was an Italian man. He too had had his surgery. He spent much of the night shouting out random words and phrases, in both English and Italian. However, whenever a member of staff approached him he claimed to be perfectly alright and seemed surprised that they had gone anywhere near him and woken him up.

Directly opposite me was a man who had also had surgery, although it was just the insertion of a pacemaker, but to listen to him, they had clearly opened his chest, without anaesthetic, to insert it, and he was very vocal about it. This made the experience of the first night comparable to sleeping during the height of a Tourette's convention.

On top of this, it was decided that I needed to have IV access, so the locum SHO was sent to achieve this. He looked very upset, after he'd missed the world's biggest vein for the second time, when I told him to go away and find someone who knew what they were doing. He seemed even more upset when he asked me if I was questioning his technique and I told him that, as he had no technique, that would not be possible.

I ended up being cannulated the following day, but unfortunately not in ordinary circumstances. As I had on my previous visit, I decided to take a trip to the shop for a paper. So, I walked downstairs, went out of the entrance and phoned m'Julie and then got a paper. However, as I was queuing to pay for the paper, I developed a bit of chest pain. Unfortunately, as I made my way back to the ward in the lift, this pain increased, and even after taking my spray back on the ward, the pain still increased. Result = ECG done (no changes), more GTN, cannula (not by Dr Mong!), more painkillers and Rick confined to ward until post-op, which I found out was to be the following Monday, 22nd September.

However, I was cheered by a visit from Hx in the afternoon where she went into secretary mode and screened/answered all my calls. However, we did managed to upset Stan (author of Naive Zebra) because he sent us 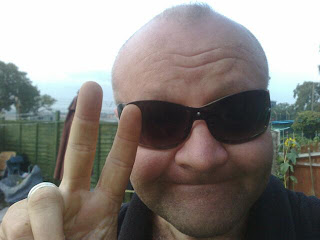 and we sent him 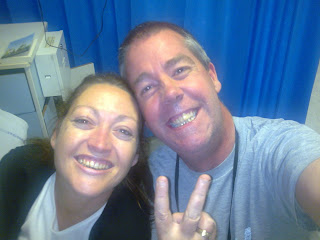 But Stan got his own back when he visited the following day, meeting m'Julie for the first time, and photos of my bruised belly have now made appearances on the forum, with suitable comments.

Unfortunately, I again proved that the angina that I was suffering had become more unstable during the wait for surgery when I again suffered some very severe chest pain during the night after a visit to the toilet and again when I was woken up by the pain have made no exertion at all. I still needed to wait until the Monday for the surgery though.

Probably the most difficult day was the Saturday as this was the day that m'Julie and Hannah visited, and was to be the last day that they visited before the surgery. The old paranoia reappeared and as I said goodbye to them, I was very aware that, as the surgery was less than 48 hours away, this could well be the last time that I see them. Not a pleasant thought.