Well, so much for my next post about the Olympics. It’s been four months since I lasted posted anything.  In fact the summer is long gone and we’re now deep in winter and very nearly at the end of another year, a year that has seemed to have passed really quickly and seen a huge number of celebrities dying.

Just a few weeks after my last post, me and Emma flew to Rome for a week’s holiday and, despite it being October, we were really lucky with the weather and had a fabulous week, doing all the usual touristy things and walking for miles!

The first surprise for both of us was that, as we were in the bus on our way to the hotel, we noticed that despite Italy being such a Catholic country, at every bus stop on the outskirts of the city there were extremely scantily clad young ladies, clearly touting for business!

The hotel where we were staying was quite close to the Basilica Santa Maria Maggiore and although we arrived quite late, we were referred to a very pleasant café right opposite the Basilica where we were able to enjoy a very nice pizza and a couple of glasses of vino rosso.

On our first full day, we walked into the centre of Rome to do a bit of sightseeing.  Prior to going, I  had downloaded an app from a company called Ulmon (I have no connection with this company other than using the app) which made it extremely easy to navigate our way around the City.

Our first port of call was to the Pantheon, which I had only explored previously when playing Assassin’s Creed, but which was far more spectacular in real life.  Sadly, when we left, it had started to rain, but it didn’t dampen our spirits too much as we headed to our next destination. 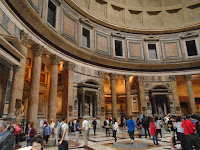 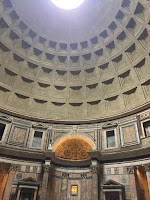 The Trevi Fountain was a big surprise to both of us.  I’d always imagined that it would be ‘out in the open’, but it was in a very small square, surrounded on all sides by buildings.  It was also absolutely rammed with tourists, but that didn’t prevent Emma from getting close enough to launch her ‘three coins in the fountain’. 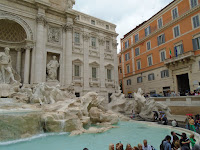 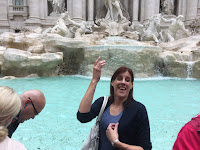 From there, we made our way round the corner and to the Spanish Steps, before finding a little café for lunch. 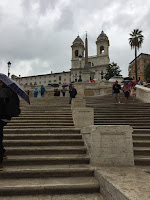 We were very lucky with the food, as we were only B&B at the hotel, and I think that other than one evening, we were really lucky with the places that we ate, finding a café or restaurant that was both reasonably priced and good every day.

On our second day we walked the half mile from our hotel to the Colosseum, which was the only place that we visited where we did an organised tour, which also included the Roman Forum. 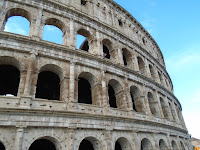 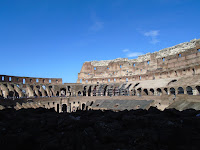 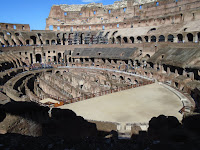 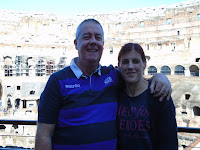 Like almost everything that we saw during our week in Rome, the Colosseum was truly spectacular, and the tour was enhanced by the fact that our tour guide was actually an archaeologist on her winter break.

On our third day, we did something a little different.  One of Emma’s Staff Nurses on her ward is Italian and comes from a city a couple of hours train ride from Rome called Viterbo, so we were up bright and early and I had the opportunity to put my appalling Italian to the test when buying train tickets.  And we were both glad that we did as the city was fabulous, with lots of history and spectacular scenery.  Emma also found the house that she wants to retire to. 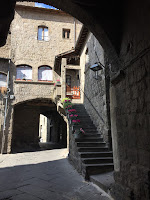 Not only that, but it didn't rain until we were on the train and on our way back to Rome.

Sunday was a lazy day, wandering around Rome, looking at the markets and paying our respects at the Commonwealth War Graves Commission Cemetery which is located within the Auralian Walls, before taking a gentle stroll up to Vatican City where we had a bit of a wander around St Peter’s Square. 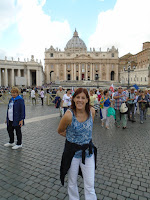 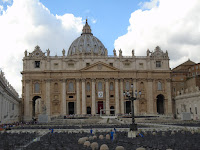 However, we returned the following day and actually went into the Basilica and even made our way all the way to the very top, 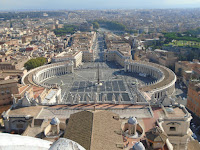 after which we then went through the Vatican Museums, which although were fabulous, they were absolutely packed and it was disappointing that once we entered the Sistine Chapel the security guards just seemed to be pushing people through as quickly as possible.

Our last day was spent again wandering around Rome and doing last minute shopping before returning, ready for another holiday!

One bit of news that we did receive whilst we were in Rome was with regards to Emma.  Emma had worked at the hospital for 24 years, as a Student Nurse, Site Manager and, most recently, as a Ward Manager.  However, earlier this year she had been the victim of bullying by a more senior person, which she had challenged.  Although the matter was resolved, she was unhappy with the manner in which this was resolved, and so she had felt that it was time for her to move on.  To that end, she had applied for a Senior Site Manager post at a hospital a little further away, Princess Royal University Hospital in Farnborough, and whilst we were away, she found out that she had been successful.  However, because of the level that she is at, she had to give three months’ notice.  The upside meant that her last day was two days before Christmas and she doesn’t start the new job until next year (well, 3rd January, so only just the New Year).

But then she’s only at work for a couple of weeks before we are away again for my big 5-OH, and I still have no idea where she’s taking me!

So, with just over six hours of 2016 left, and just three weeks of my fiftieth year left, I can only look forward to what 2017 will bring and wish everyone a Happy New Year.
Posted by Rick at 17:35